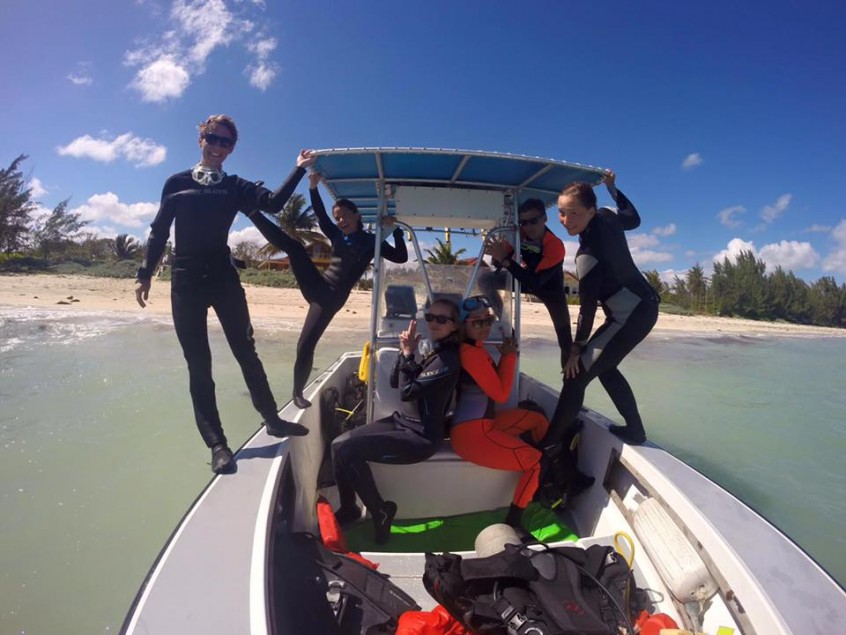 In the morning the most of us were happy to wake up without a hangover and more sleep, so there were smiles all around.

For the first half of the day the beginners were briefed on how to assemble their dive gear for the first time. After they finished there session, they were thrilled to have learnt something new. The already trained open water and advanced divers did their scuba refresher.

After lunch the beginners slowly got their lives together and started their confined water dive. The other group was given a fish lecture on Wrasses and Parrotfishes. There were some very interesting sentences to remember the fish names, such as a fish that snorted mustard because he couldn’t afford cocaine (cocaine was defiantly on someone’s mind). After the lecture, half the group decided to go for a snorkel in the river while others stayed back and played fish quizzes. We were excited to snorkel in the river because it was a new environment for all of us. We saw lots of upside down jellyfish, Juvenile Queen Parrotfish and Sea star’s. Ellie was super cute and roamed along the river bank while we were in the river.

After eating yummy flat bread we finished the day with a camp meeting and a handful of the group got comfy on the lounges, cuddled the animals and watched Hot Fuzz. Even though Sally the dog wasn’t quite the biggest fan of the movie most of us enjoyed.

Word of the day: Floaters

After an early breakfast we made our way to the mangrove flats. The place was gorgeous and Wavel from the forestry commition was really happy and appreciated our plan to help  and do something for the environment. The American group from Maryland who stayed one week down the street were already there when we arrived. After starting to help cleaning the area from rubbish, scrubbing up the pine leafs and plant some mangroves we start feeling warm and felt good giving something back.

Although arriving back in camp and feeling the upcoming sunshine was really satisfying. When a dead turtle was found on the beach we experienced real life marine biology with a turtle dissection. It was pretty stinky and sometimes weird to watch but at the same time you know you won’t get that opportunity again soon. So we enjoyed the dissection and at least we skipped a fish lesson.

After all the trouble was gone people met in the kitchen learning some diving or fish knowledge while they were waiting for dinner. Everyone went to bed early because we were exited to may get the chance to go out diving

Phrase of the day, mangroves!!!

On Wednesday morning the first group of divers were taken out for their first dive but the waves were too big to dive. The whole group was devastated but we all completely understood why the instructors weren’t confident to take us in the water. After the excitement of thinking we were going diving we just wanted to get in the water so we went snorkeling at one rock instead. The waves were a little rough, however the visibility was much better then the first time we all swam out.

The beginners were able to continue their confined water dive, yay for them :). The rest of us soaked in the sun and added to our vitamin D storage, we felt like we were living the Bahamian lifestyle. In the afternoon we sat around the table and worked in groups using fish cards to identify different fish families. After that we then distinguished which fish was a juvenile, or if it was at it’s intermediate or terminal stage. Overall we did a great job working together and found the interactive cards beneficial.

Later on the evening we all came together to eat a lovely cooked meal and we were also treated with banana and peaches for dessert. After eating dinner we all went to Timmy’s bar for quiz night, we all had a good laugh and enjoyed watching the group shake their humps.

Phrase of the day:  Antoine will be the judge 😉

Waking and getting up on Thursday felt good and even the porridge tasted amazing because we knew that the chances were better to go out diving. And finally we did go out.

Because some of the peoples dive were a while ago and some not, some were more nervous than others. Exited and with fingers crossed we drove out with the boat and hoped for the best. Just Ian was relaxed and calm as always.

Going diving made us all happy although the reef was still recovering from the summer bleaching event. But now we saw one of the reasons we are here at andros and why we should care more about environment especially as divers. Marine conversation helps the ocean, reefs and fish to get healthier and get a better quality of existing / life.

As the first group came back, they were already expected from people at the beach. When they saw the happy faces they knew we went diving and everybody is able to go out as well.

While the beginners were learning and improving their skills with sitting out in the cold and flat water the others went to visit the kids at the school. As we arrived they were pretty exited and full of energy because of the sugar of the cake they ate before. Trying to teach them something at this day was pretty though so we were really exhausted when we arrived back in camp.

Our romantic couple of the day were josh and Lawrence who started a play fight after fish lesson at Timmys but then josh somehow ended up in Lawrence arms and he carried him romantically down the beach toward the sun.

…was the kind of day that you would normally go to the movies but here on Andros Island you go to Timmy’s to play monopoly, scrabble and poker.

After lunch James gave a very informative mangrove lecture. For those that don’t have a background in marine biology were very intrigued by the relationship between mangroves and coral reefs. For those who didn’t attend the lecture, the overall message was that you can’t have a coral reef without mangroves. This was a great lecture to listen to after being involved in mangrove restoration. Even though we only helped clear a few Australian pine trees, transplanted a garden of mangroves, this lecture taught us that every little bit can make a difference.

Soon after the lecture we walked over to The Bahamas National Trust for another lecture with the Maryland University students. We were given information about the marine parks on Andros Island, conservation projects and beauty of living on Andros island as well as the day to day the struggles. We were happy to know that it wasn’t just Green force that had dribbling showers. A student from the Bahamas University also gave us a lecture on about the importance of Parrotfish and explored the relationship between humans and the natural environment. My favorite quote was “In order to gain something you need to drop another”. Learning about how Parrot Fish interact with it’s environment was very beneficial as the volunteers where now able to understand why parrot fish are on the surveying list.

When we got back from the lecture, a group of us hung by sea to enjoy what we thought to be the clam before the storm. Even an Eagle ray was spotted swimming across the shallow waters; some were even lucky enough to share an afternoon swim with it.

In the evening the frogs joined us in the boy’s toilets for a conversation, “You shall not flush this toilet”. At the end of week we all excited for the Saturday BQQ and trip away.

Phrase of the day: I get away to the get away.

For the best day of the week everyone loved to get up to the smell of the pancakes. After the nice and delicious breakfast we all jumped into our trucks to get to the captain bills blue hole.

The journey turned into an adventuring safari drive. Zara told us that the staff thought we would deserve the nicest blue hole after this rough sea week. When we arrived at the blue hole we were all amazed by the view and the scenery of this blue hole.  The sun warmed us and the boardwalk made it easy for us to enjoy the sun and jump into the water

For lunch we had an open cooked barbecue. Although the annoying wind,which also made us cold when we came out of the water before, made it hard to start the open fire barbecue we all enjoyed the nice barbecue. Luckily the boys did not ruin it.

After the energy tanks who had been emptied by front flips, splashing into the water and laughing all the time had been refilled with the lunch we made our way back to camp.

When then someone shouted ‘doplphin“ trough the whole camp everyone ran out like  wild CRAZIES as if they would been haunted by zombies.

Tonight was party and Timmy time again so the dress code was clean and no homeless for at least one evening in the week. Interested in what would happen this Saturday evening people met after dinner at Timmy’s or the fire. We managed to get some marshmallows to roasted in the fire.

We got some new island members who came out of one arriving car and it felt like the party would never stop.

After having some real deep conversations, deep insights of things we might not want to hear and recognition that some people will leave in a week which made us sad  we went to bed really late or early, it depends on how you define it.

Phrase of the day: it’s windy but life is great ….enjoying making connections all over the globe

After a pretty cold and windy week we woke up and caught the first sunshine on the balcony and waited for brunch to get ready. That’s how a morning supposed to be in the Bahamas!

Sunny,tired from last night, warm, relaxed and in a good and funny mood.

The breakfast table was a good chance to get to know what happened last night, especially for those who’s memories were not the best while having a fatty breakfast.

Some of us used the ocean to feel refreshed after sun bathing and went snorkeling. They got sucked off by a shark sucker.

Some wanted to feel the Bahamian life even more deeply and went to get dreads in their hair.

This was a good day to relax, get rid of hangover, taking naps, doing laundry, enjoying sun and enjoy the presents of the camp. Yoga and attempted spear fishing with a sharpened stick were alternative activities.

Living in a camp 24/7 for weeks let people get in touch quickly and more intensely. Our little community will loose some people  next week and although it might be sad we enjoy life and spending time together and see what will happen next week.

The highlight of the day was pop tarts from Zara and Elyssa.

Phrase of the day: No, no Spanish night. Tequila makes your pants go down