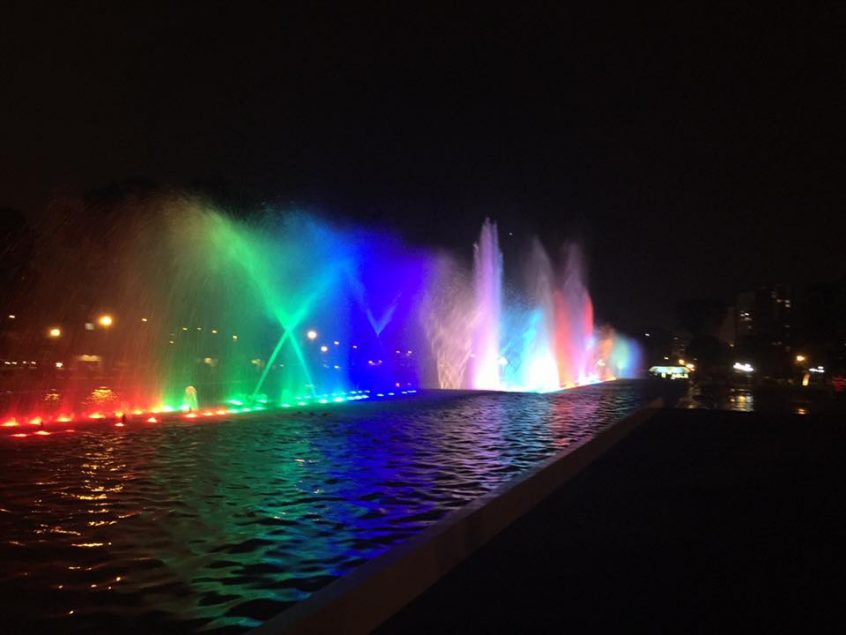 A Trek to Machu Picchu during our gap year in Peru took a lot out of us. Physically. Emotionally.

How does one hope to quickly recover after trekking a gruelling four (even five) days, up and down high altitudes, across difficult terrains, scaling steep steps, pushing through searing blisters, agonising muscles, insect bites, scrapes, cuts, colds, sickness?

The answer: Oreo milkshakes and waffles!

Which worked. Apart from the over-active child in the room with us (it wasn’t me this time) it was a feast of epic proportions. Just the thing we needed before a 22 hour luxury bus journey from Cusco to Lima. And what a Hellish bus journey it was too – the seats only reclined to 180degrees (apart from Eleanor’s, which wouldn’t remain down!) with our own private TVs (though most things were in Spanish if even they worked), WiFi (which didn’t connect to the Internet), food (hmmm, sort of), and air conditioning with a 10x20x1 air filter (which was better when we opened the emergency exit hatches on the roof)! But, of course, I jest. The bus trip was really nice, especially when compared with the busses in Belize, and it was a hell of a lot simpler, and with considerably more leg room, than flying. It was an enormous luxury bus and I’m just making fun of some of the problems we had, but all in all I’ve been in far less comfortable places for 20+ hours, planes included. A couple of the group even managed to watch the Revenant, which sadly would not work for me.

So we arrived in Lima mostly refreshed and with less than 24 hours before we would leave the capital and head north.

Like my short stay in Miraflores weeks ago (it really feels like a lot longer…) we didn’t get much of a chance to explore Lima. Although I can’t say that exploring big cities is my idea of fun, we did go and watch the most incredible light-fountain show. I mean, literally, the Bellagio really has to up its game. This was bright and colourful without being gaudy or tacky, beautiful without being ostentatious. I must say it impressed me (well, obviously) and just goes to show what you can find in the most unlikeliest of places. They even had a dog show going on. It should go without saying, but I shall say it anyway, that the little golden Labrador puppy did not perform EXACTLY as the owner perhaps hoped he would.

We played some pool in our hostel, and somehow I wasn’t the worst player. I think this largely had to do with the fact that everyone else’s skill was handicapped due to crooked cues and a warped table top. Still! I played admirably, and certainly did not sink to low-character methods of distraction and petty annoyances…

Sam and Rashid brought the noise with their insanely talented (from my perspective, at least) performances on little wooden cajón boxes. Not quite sure how they can make impromptu beats of such quality when I can’t walk straight without tripping over, but there you go!

After stocking up on sushi, pizza, burgers, subways, fruits, and water, we headed off on our next over-night bus journey. Sam took note of a couple of massage chairs which we proceeded to make full use of! The bus trip was more of the same, only this time I got lucky with a working TV – The Heart of the Sea, followed by Heist/Bus 657, and finally It Follows.

The Pacific, the sun, the sand, the beer, the food. A place to have fun and enjoy! 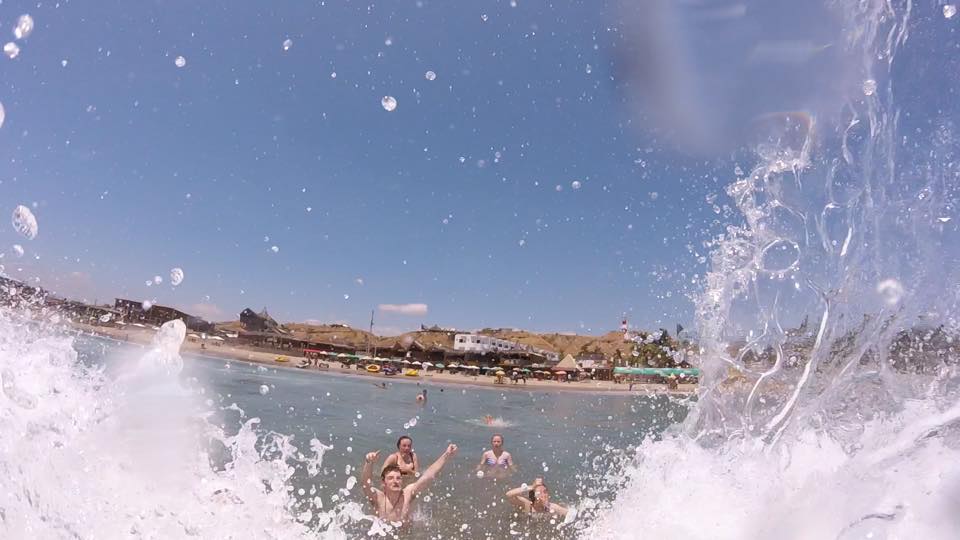 It turns out though that there are side effects to spending the whole day jumping into waves and swimming around like a loon. Apparently – now, hang on tight with this one, because it might be confusing at first, but apparently – the sun burns. It burns worse when it’s very hot and riding a cloudless sky. It burns the most when you don’t wear sunscreen. Now, anyone that has read my previous posts (surely not!) would know I spoke a little feverishly about wearing sunscreen. I even quoted Baz Luhrmann. Turns out, like the rest of the world, I didn’t pay any attention to myself. So now my face and shoulders are a little crispy! But then my sunburn wasn’t even a fraction as bad as Aaron – the man sprayed on sunscreen to his arms, but didn’t rub the cream in. So all he ended up with was livid-purple burns on his shoulders, bright pink arms, and one white spot on each arm where the sunscreen had done it’s protective job!

Anyway, I didn’t let that stop me. We all decided the answer was more sun and sea. So we set off to go swimming with a bunch of laid back and chill turtles! The excursion wasn’t quite how I imagined – swimming around a reef or a sandbar while the turtles congregated around me, hungry to be involved in my GoPro selfie. Instead, we hopped off a pier and swam around a little roped-off square of water where the turtles came, eager to be in my GoPro selfie (or maybe for food, who can tell at this point?). Don’t get me wrong, it was enjoyable and I love being around marine life whenever possible but I just hoped for a little better environment. Although relaxing on the beach afterwards was pretty fun, and for a four hour excursion with 800+ pictures included for free wasn’t too shabby for what equated to less than £10.

As a quick aside, I’m pretty sure we also found the worst laundry service in Mancora, possibly in Peru. Situated opposite our hostel, the man informed us he would have our clean clothes ready for us by 11 the next day. A little under 24 hours, which is a fairly reasonable turn around. Except…not only were all our clothes NOT ready, the ones that had been “washed” smelled of sweat and were stained and dirty. Nobody ended up paying and we fortunately found an angel of a woman on the next street who folded our clothes and made them smell like a fresh meadow, even mine, which had been steadily and eagerly fermenting in a plastic bag with all my Machu Picchu sweat.

Jet-skiing, running on the beach, and watching a phenomenal Pacific sunset were highlights of the next day. I’m not saying I’m a natural jet-skier but I did tell Eleanor I would make us fall off…and we fell off. Pretty sure I’m an expert, therefore. If I wasn’t, how would I have known I’d have been able to make us fall off? Logic! After my unbeatable powers of foresight, we both figured a short run was in order; though neither of us timed it or knew the distance, so I can’t really tell if it was a reputable run. But it was excellent to run barefoot on the beach, to end with a swim in the Pacific, waves crashing over us as it cooled us down, fish jumping out of the water all around us, surfers riding the waves, birds gliding in front of the setting sun. Hard to describe the scene perfectly – and I would show you a picture but I didn’t take my camera; sad to say my camera-work probably couldn’t do the image justice anyway. 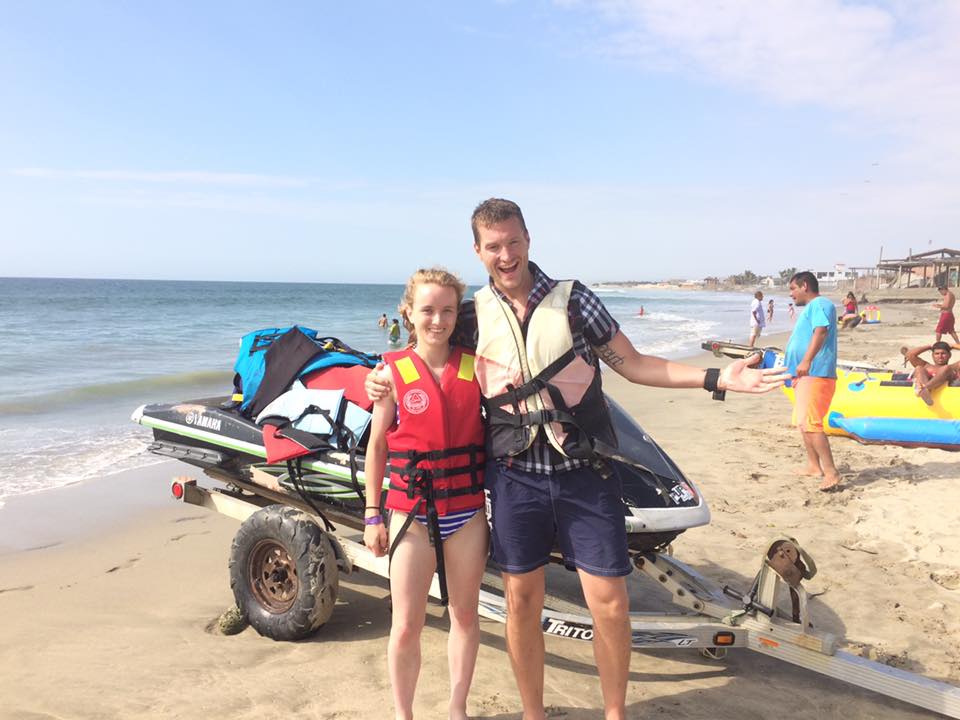 Sam even treated us to some tunes on his guitar as we sat on the beach under the night sky. Slightly talented guy actually, which is a slight understatement. Somehow, Sam can make a beat out of any solid surface, but hand him a guitar and he’s in his own world. It was really impressive stuff!

For our last day? We had to say a temporary farewell to Alex, who flew to Milan to sort out her university (bloody students), but thankfully we’ll see her again in a week.

And then back to the beach! Eleanor and I decided to ride the jet ski again. Some highlights included me hitting a huge wave at the wrong angle, launching into the air for a good few seconds, before landing with ball-crushing force and smacking my face against the controls! After that we decided to swap controls, although Eleanor managed to throw me from the back of the jet ski by turning the machine sharply after a jump (she says the jet ski turned itself…) and getting pummelled by another wave after surfacing.

Some of the group tried their hand at surfing later on, thanks to Sam (talented mother fucker…) for offering to teach them. I didn’t think I’d have enough time, but I did join them for a bit in the waves to film it and grab some pictures.

And that about does it for Mancora. You’ve been a great place to relax and have fun. Next stop: Ecuador!

Find out more about our South America Explore program