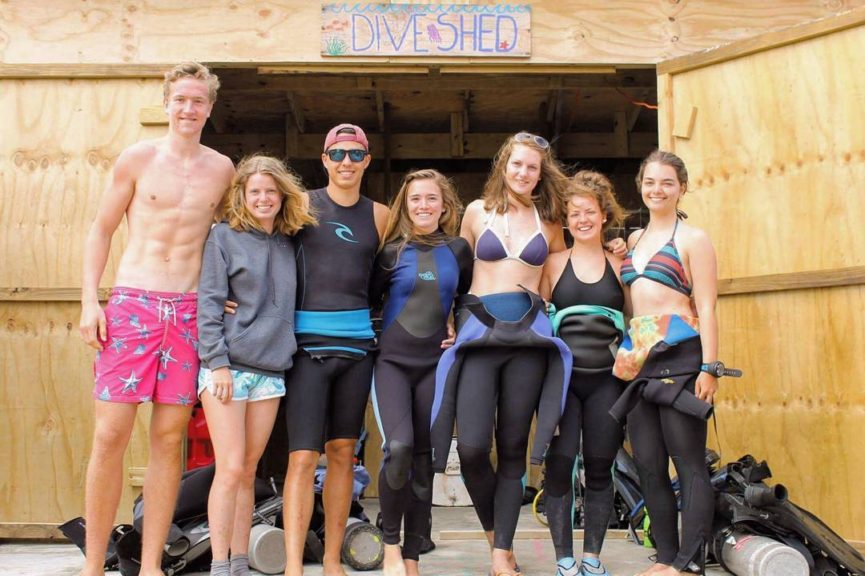 Stay up-to-date with this summary of the fourth week on our Bahamas Marine Conservation program in February 2017. Written by Rhiannon & Abi

Our fourth week on Andros island has been a very productive one. With more and more volunteers becoming certified divers, we were able to dive almost every day; some of us even managing to dive twice on some days.

Monday was supposed to be full of dives and lectures, however two volunteers had to take a drive around the island with Jay to visit the doctor, so we had to postpone a couple of them. In spite of this, some of the newly certified open water divers were able to begin their advanced open water courses, and even spotted a nurse shark, while the newly certified advanced open water divers started their Fish and Coral ID spots. Monday night saw the long awaited return of The Village, in which the villagers once again managed to protect their beloved town, and Jonas was crowned Hero of the Week due to being the King of Fish ID and his generosity with dive equipment.

The next day was Maddie’s 18th birthday, which meant we got to eat another one of Tori’s famous cakes. However, many of us nearly fed that cake to the fishes that afternoon due to the rough weather causing the water to be very choppy and many of us feeling seasick.

Wednesday was an eventful day. The morning was full of diving, with a southern stingray sighting, and an unexpected Remora fish paying very close attention to the divers for around 20 minutes. The afternoon included an IUCN lecture which led to all volunteers to becoming very educated on the most vulnerable and endangered species of marine life, followed by an awesome shark documentary, which taught Peter not to spoon sharks. We also learned that whale sharks can grow to 12 metres long, and there is a particular species of shark who lives a sad and lonely life with a parasite on its eye which causes it to go blind. Later that night we began our weekly quiz night with a very promising start; some entertaining commercials were created to advertise different camp chores. Then disaster struck when Rachel and Peter collided on a race to the sea, resulting in a swollen lip and a wobbly tooth. There was a massive group effort in the search for Rachel’s glasses which had somehow found their way into the sea, but thankfully were found. And that was the end of quiz night.

Thursday morning was very productive with five volunteers becoming certified advanced open water divers! The car went into the shop for some repairs, and we had another exhausting afternoon of being human climbing frames at the local school, with Danny experiencing the chaos for the first time.

Another big birthday occurred on Friday with Rachel turning 21; however she wasn’t around to celebrate with us due to an emergency trip to a dentist in Nassau, allowing her to spend the weekend in a nice hotel and making all the other volunteers jealous with her clean toilets and warm showers! Many of the volunteers had the opportunity to go to the immigration office to renew their visas, only to find that it was closed, so now there is a slight fear of spontaneous deportation. Our final dive of the day was cancelled because of the poor weather, but it wasn’t a total loss as we all had a party on Rachel’s behalf.

After a few poor choices on Friday night, Saturday morning saw quite a few hangovers, treated with our weekly dose of French toast and a relaxing trip to Captain Bill’s blue hole. During the journey, Jana attempted to gas some of the volunteers by turning on the air-conditioning in our new(ish), but very dusty, rental car, spewing out a huge white dust cloud. We enjoyed a very tasty BBQ, and a lot of the volunteers were testing their free-diving skills, but couldn’t come close to Thor who reached 15 metres. We spent the rest of the day performing various flips and jumps into the water, and catching a few rays of sun. Saturday night was a real treat because we got dressed up a little with many of the girls raiding each others suitcases and headed to the Brigadier’s restaurant, where we got to experience real food that didn’t consist of only noodles and veg, and many volunteers trying Conch for the first time. We finished the night at Timmy’s bar with a few drinks and prepared ourselves for a very chilled Sunday.

Sunday started off very well with our weekly brunch, filling us with bacon, eggs, toast and pancakes. However, things got a bit more hectic when a smoke bomb was discovered on the beach; the authorities were called and we were evacuated to the volleyball court until it was retrieved. Thankfully it wasn’t harmful, and was dealt with quickly (don’t worry, Mum). Emotions were running high as it was time for the first of our volunteers to go home, and there were tears all round as we saw Laura off in her taxi. Shortly after her departure we were able to return to camp and start preparations for that night’s festivities as Timmy showed the Superbowl in his bar, enjoyed alongside quesadillas, guacamole and a few drinks. Many volunteers then went to bed early after a very eventful afternoon, eager to see what next week has in store for us here at Greenforce.

Are you thinking about a gap year traveling to the Bahamas? We’d love to hear from you and answer any questions on your mind.