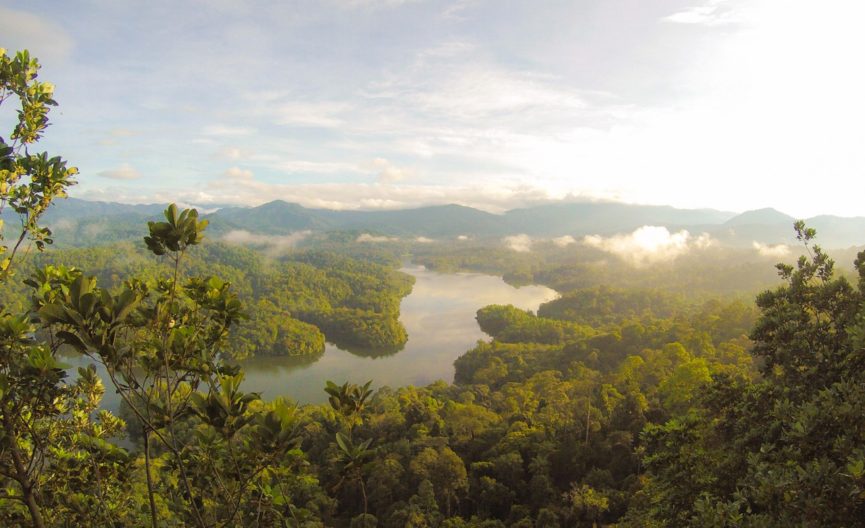 Ryan shares his summary of the trek week of our Expedition Leader Training program.

We aimed to challenge ourselves on trek. We set out to travel through Bri land – through rivers and into deep, untouched jungle.

Our first day began with a boat ride across the Sixaola River and then trekked for the next six hours – most of which was in the Bris River. About halfway to our first camp we needed to remove our packs and swim through a section of the river carrying our 20 kilo packs overhead. This was our first challenge which was followed by a night of torrential downpour. This may sound grim, but it is part of the beauty of trek. Not everything should be easy or run smoothly because without the challenges there would be no memorable story, and the glorious bits wouldn’t seem as incredible.

The following day we forged our own path in La Amistad National Park, cut through thick jungle and hiked up muddy hills. This was followed by a lunch in Yorkin Village where one of our guides grew up. It was an honour to be there. The people there were so kind and very generous with food! We spent that night in a cacao plantation on the border of panama.

Day three was much more challenging. We faced several technical features such as a long scramble over boulders on the side of the Yorkin River and some river crossings in faster water. This strenuous path led us into Panama. We were entering deeper jungle. We arrived at camp early in the day and set out for a day trek. This depth of jungle was considered sacred so our team needed to trek in silence. It led us through land that few had ever set foot on.

Day four consisted of another strenuous morning trailblazing and scaling muddy hills. Loads of teamwork was needed to overcome these obstacles and continue our trek. At the top of those hills, about 1000 meters in elevation, the jungle was pristine and lightly covered in fog. This created a wild heavenly atmosphere. The morning effort was well worth it because the evening included a refreshing waterfall swim.

The fifth and final day included a few obstacles, but a few refreshing snacks from Yorkin Village. We ended up stopping here again and had one last chance to experience the beauty of their culture. The last leg of trek was a few hundred meter trek up a hill and another boat ride across the Sixaola River.

In summary completing this trek gave us all feelings of satisfaction gratitude and amazement. We had the incredible opportunity to venture in some of the purest jungle wilderness on earth and challenge ourselves to be better leaders and team members on this course. This five day experience was probably one of the major highlights of the T.E.L. Course thus far.

Are you thinking about trekking through the on your gap year? We’d love to hear from you and answer any questions on your mind.