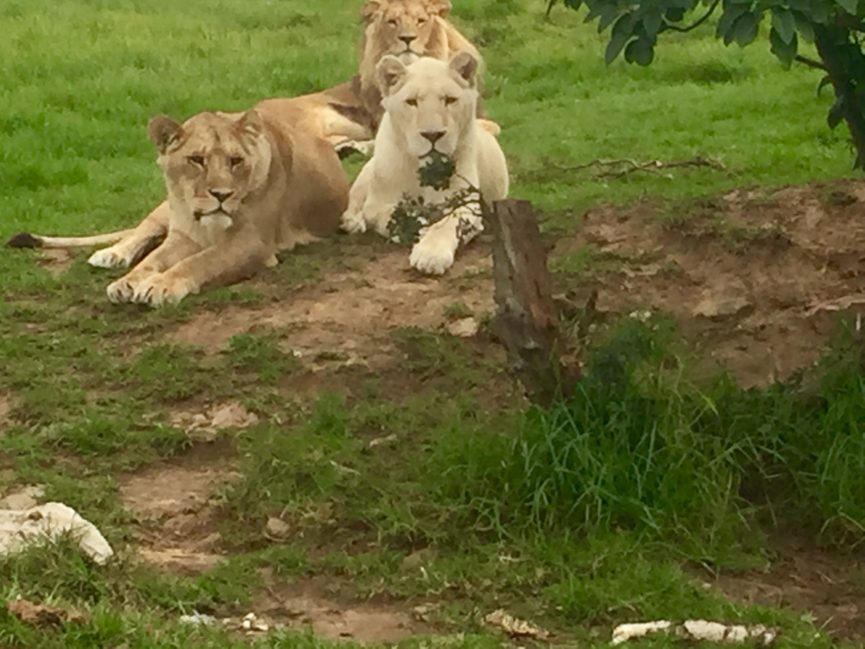 Juliette St Clair shares what the team have been up to on their game reserve volunteering in South Africa!

We began the morning of our fifth week by attempting to tame the chilled waves of Port Elizabeth’s Nelson Mandela Bay in what was, for most of us, our first time venturing the sport of surfing. Instead we were the ones tamed by the playful surf but not without a few good tries and a fun experience to remember.

The shuttle to the Kwantu Game Reserve arrived at the Lungile Lounge hostel at 4:00pm. We were greeted by Jeff, the quirky and friendly Kwantu driver. The ride was a scenic one following South Africa’s Coastal beauty and was well worth the hour journey. Upon entering the vicinity of the Reserve we were welcomed by numerous members of the animal kingdom. Antelope gracefully strode across the hillside against the backdrop of a setting sun. The deadly Puff Adder made its first and only appearance during the trip and slithered across the road as we approached the gates of Kwantu. Just after the reptile’s harmless  encounter the resident lion king, named Mufasa gave us a salute from the inside of the fence as we arrived at our destination.

We were received by one of the volunteer directors Faith who was delightfully energetic. Though at times her playful manner prompted a voice that could use some slight volume adjustment. She showed us our sleeping arrangements which was a long hall with bunk beds and warned us of potential bat sightings and monkey break ins, before introducing us to what was surprisingly a large number of other volunteers who’s residencies were scattered over the globe. They were warm and welcoming, and gave us a guided tour of the facilities before 6 o’clock dinner, which offered us a variety of delicious dishes. After dinner a traditional tribal dance was available to us for evening entertainment followed by watching the lion king before falling asleep to the very real and seemingly close roaring of the lions while a few bats occasionally flew overhead. 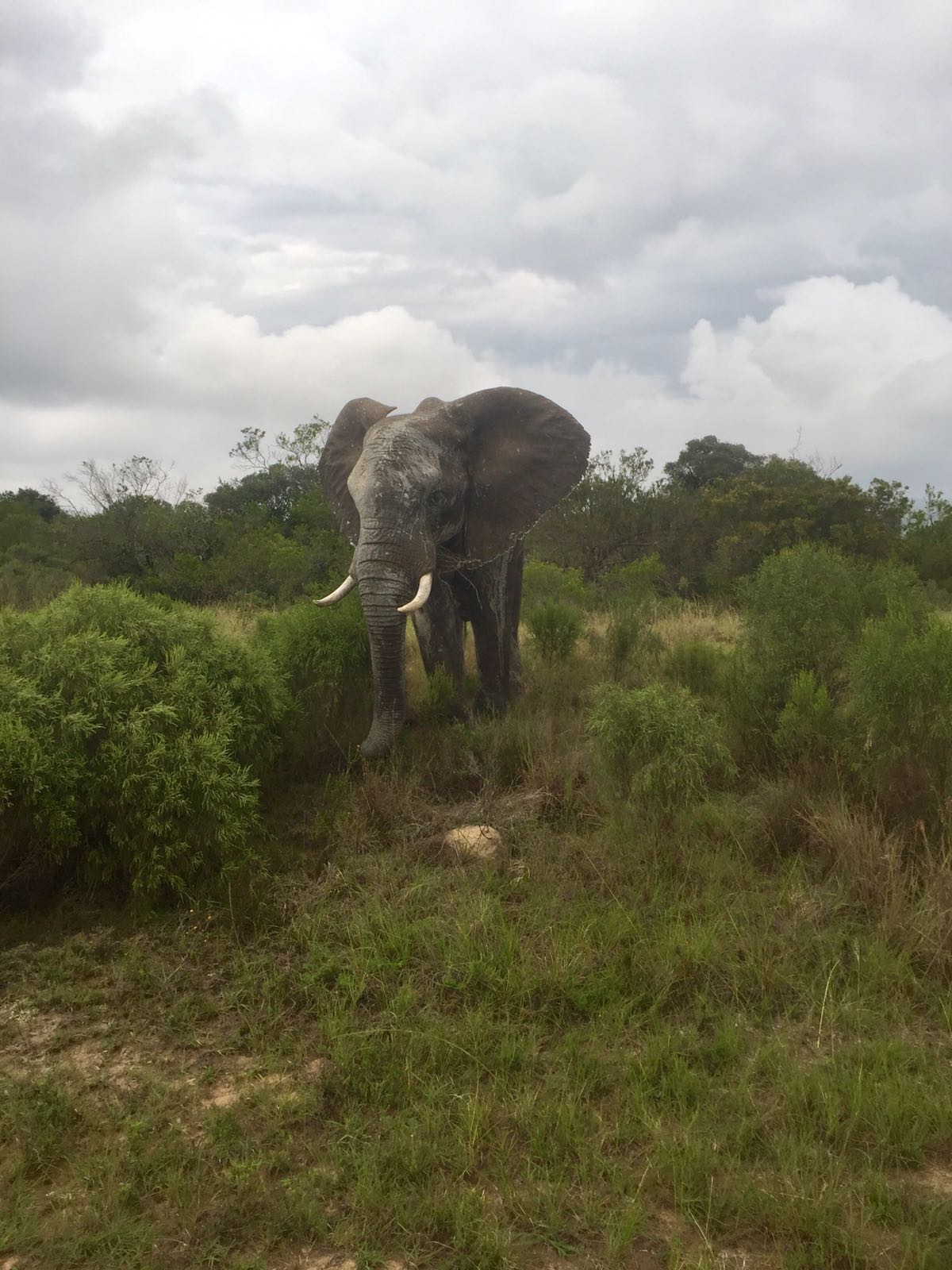 The first full day on the reserve we were given a safari by both a game ranger and a ranger in training. A sunny day offered exciting viewings of many zebra, a variety of antelope, the swimming hippopotamuses and a wandering Giraffe, before searching for the lions whom we found chowing down on the carcass of the largest of the antelope species. On our return from the safari we were given a tour of the touch farm which is somewhat like an exotic petting zoo except almost all the animals in it don’t like to be touched. There was an ostrich given the rather crude but hilarious official name a**hole who I was told often chases after visitors who got too close and a parrot who would death stare you with the intensity of the grim reaper while screeching at the top of its lungs. On the bright and highly exciting side though there were two cages you could enter and visit marmosets who would jump from the cage to your back and sit on your shoulders and in the other cage parakeets who would land on your arms and pose for the perfect selfies. After our visit with the animals of the touch farm, we visited the predators which consisted of tigers who were there for their preservation and lions who were maturing to the age of 8 so they could take care of themselves properly when released into the reserve.

Over the next two weeks we took part in two activities a day that consisted of fence clearing: weeding the electric fence, chopping down invasive tree species as a group by taking turns with dull machetes (one of my favorite activities), fence patrol: hiking along the fence to check for damage which once led us to encounter a beautiful male elephant who mock charged at us before continuing his grazing, a short time later a thunder storm rolled in and poured down on us as we ran back to the shelter of our camp, grass planting, road maintenance, digging trenches to allow drainage in the roads, filling in areas of land that had been eroded, feeding raw cow meat to the caged predators, and game counting: checking to make sure that each species of prey was at a healthy population count due to the over population of predators in the reserve.

Each activity was enjoyable and made fun and educational by the wonderful Rangers and volunteers we were surrounded by. In the evenings we would relax by sitting around campfires telling stories, watching movies, playing card games, taking part in the reserves presentations: such as a professional snake catcher who taught us about local culture and types of reptiles as well as allowing us to interact with boa constrictors, or we would just spend the nights talking while sipping on some hot beverages. 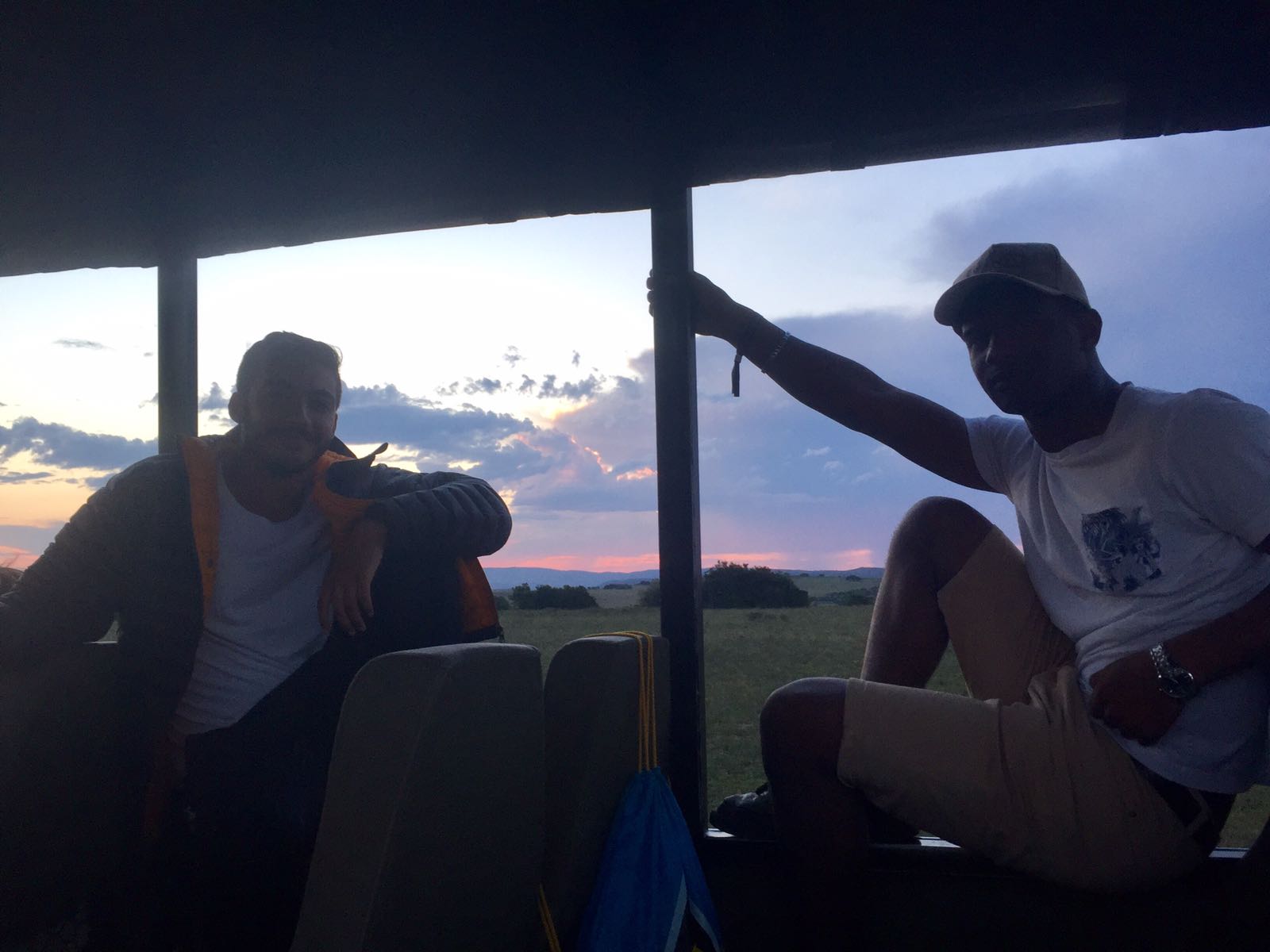 We were also offered sunrise, sunset and nighttime game drives throughout the two weeks which offered a new variety of animal sightings some of which were Aardwolves and Ant Eaters and herds of elephants some of which adorably held each others tails while marching along, and more up close and personal encounters with both the baby lions which we found cuddling under a bush and the male lions whom began to call to the pride with commanding and vast reaching roars that echoed across the park and which lions from all directions answered quickly and resonantly all of which we viewed on picturesque back drops worthy of both national geographic and the lion king itself.

On the weekends we had the opportunity to go into Port Elizabeth and stay at the reserve’s hostel while taking advantage of the nearby clubs such as Beer  Shack and White Tiger, as well as the Port Elizabeth Board Walk and shopping plaza. We also spent an evening at what was for me my first rugby game. It was an intense match between the Durban Sharks and the Port Elizabeth Kings but a light hearted evening for our group.

At the end of our two weeks in the Kwantu Game Reserve it was quite clear that the reserve was well named as the meaning of Kwantu is “a place of gathering”, it was hard to say goodbye to friends who has become so close so quickly and to our temporary home, the beautiful landscapes of the reserve, teeming with so much life that we had been so lucky to observe in all its majesty . It was an absolutely memorable and irreplaceable two weeks in our amazing adventure in South Africa.