Machu Picchu, Lost City of the Inca: one of the Seven New Wonders of the World, Relatively new, anyway – the fabled mountain citadel was constructed six hundred years ago as the spiritual heart of the powerful Inca Empire. It is thought to have survived the Spanish colonisation that all but destroyed the Inca civilisation, lying hidden in the jungle-clad mountains until the publication of its existence by the American explorer Hiram Bingham in 1911.

Today, Machu Picchu is so synonymous with Peru that it’s almost unthinkable to visit the country without a pilgrimage to this remarkable example of its cultural heritage. If you were so inclined, that pilgrimage could be completed entirely within the confines of an air-conditioned vehicle.

A train will take you most of the way, and tourist buses daily deposit their loads of camera-toting car seat explorers at the visitor centre, congratulating themselves on their adventurous spirit as they queue for the chance of that classic photo in front of mysterious stone buildings amid green mountains.

Your author would like to assure you he does not hate photographers. Nor tourists, having been one himself. But someone once said that it’s the journey that matters, and here at Gapforce we’re inclined to agree.

The Inca Trail is the classic walking route to Machu Picchu, famous for being part of the Royal Road system that connected the Inca Empire. The price paid by the modern traveller is that they must share the route with a lot of other hikers. The Trail is now so oversubscribed that hiking permits for the summer season sell out months in advance.

Thankfully, the Inca were master builders who paved the way throughout the Andes. Many of the ancient Inca ways form alternative routes to Machu Picchu. For us, the best of these is the Salkantay Route. Experienced local guides will attest that Salkantay offers landscapes surpassing even the Inca Trail in magnificence, with 70% less human traffic. This is the way to the Lost City for those who prefer a path less travelled. 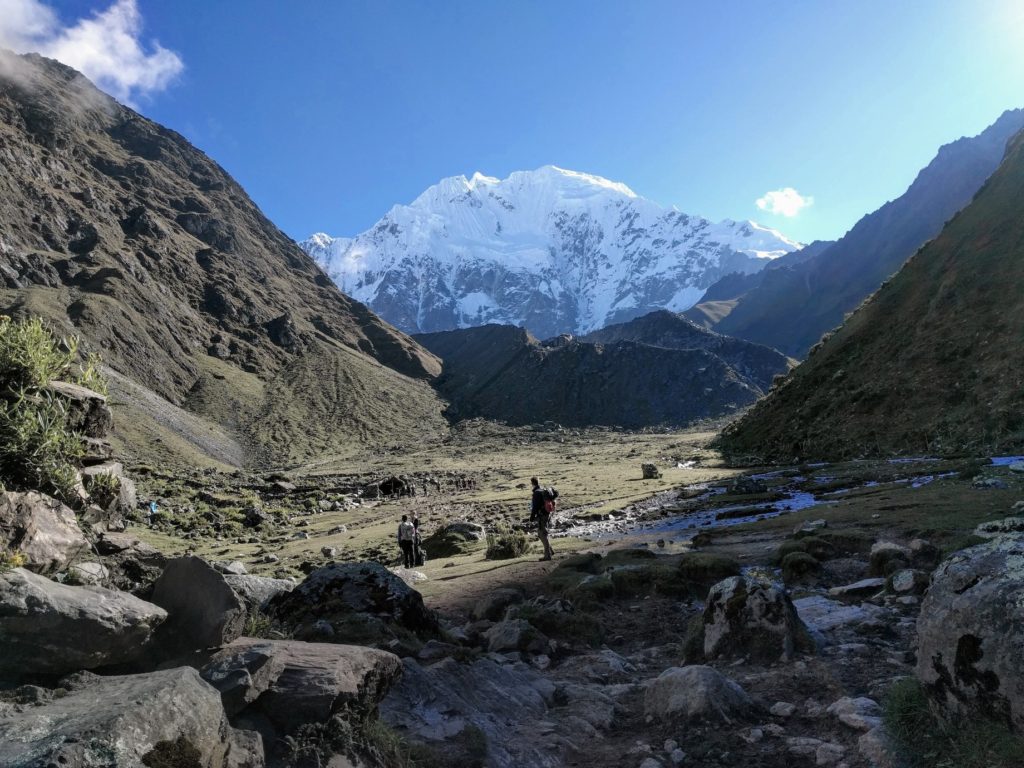 The Route
Day 1
April 2018. The launching point for the Salkantay trek was Mollepata, a picturesque mountain town two hours’ drive from Cusco. The journey on foot began at the end of the drivable road. First came a moderate climb through the scrub to reach a secret path clinging to the valley side. At first glance the aqueduct was unremarkable, a stone water channel with a path running alongside.

As we followed, our guide revealed that the water conduit was built six hundred years ago on the instruction of the Inca hero-king Pachacutec, to channel fresh water from the mountains all the way to his ancient capital of Cusco. In testament to the quality of Inca engineering, the channel provided firm, level footing as we headed up the Mollepata Valley. The way was vertigo-inducing in places, with snow-capped peaks far above and a river canyon around two vertical kilometres below.

2-3 hours easy walking through the Lord-of-the-Rings-themed scenery, and the valley floor rose to meet us at Soraypampa, the first night’s campsite. By now the lush eucalyptus scrub of the lower elevations had been left behind in place of wind-swept grass. After lunch, we hiked higher still, up to the head of the valley and the foot of the imposing Mount Umantay.

Up there the air was thin, and some of the party began to experience the first signs of altitude sickness. The extra climb was worth the push, however – it would help prepare for the ascents ahead, and gave an extraordinary view of ice, rock and air. There was enough time to marvel at the sapphire-blue glacial lake, sacred to the Inca and still a place of legend for today’s Quechua indigenous population – before the biting wind and setting sun drove the team back town to the tents.

At 3,900 m (12,800 ft), this could be a punishing place to spend the night. The first campsite of the trek was also the highest and coldest, with night-time temperatures dropping to below -10 °C (14 °F). The crystal clear air and lack of light pollution offered staggering (if teeth-chattering) views of the Milky Way, with the snowy peaks glowing under reflected starlight.

Day 2
The second day of the trek promised the biggest challenge. The route lay up and over the 4600 m (15,091 ft) Salkantay Pass, up where even the grass gave way to bare rock and snow. Taking it steady, the highest point of the trek was reached by late morning – breathtaking in its literal sense. Higher still but inaccessible to us was the ice-bound peak called Salkantay, one of the holiest apus or sacred mountains in the Inca pantheon.

Having made it over the pass, paying homage to the mountain after which the trek is named, we descended into what seemed like another world. From the high, dry environment we had just left, suddenly we were enveloped in subtropical cloud forest where the constant fog condensed and dripped from contorted, mossy trees. There followed a long hike through this mysterious garden of orchids and epiphytes, finally completing a 9 hour, 20 km day at the valleyside camping settlement at Colpa. 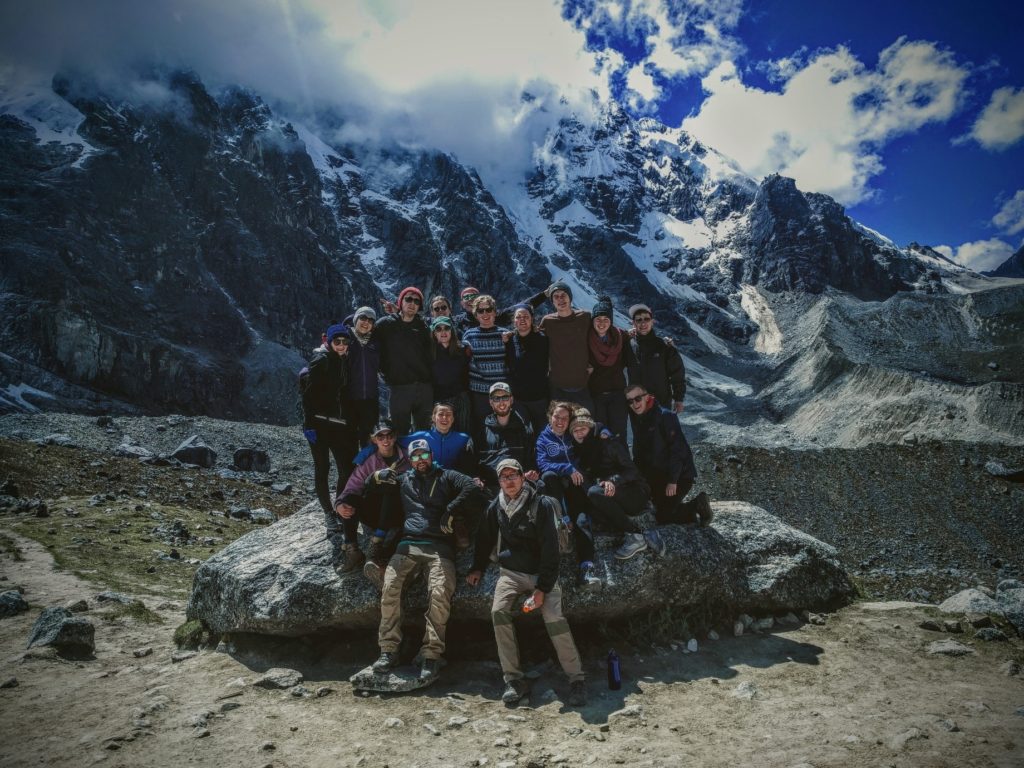 Day 3
Now on the eastern side of the Andes and within two days’ march of our goal, our path took us down another vast forested valley. The trail we now trod followed the course of an ancient Inca highway, part of the original Capac Ñan or Royal Road network that drew together the far corners of an empire.

The Inca Pachacutec is said to have boasted the ability to enjoy fish fresh from the Pacific, hundreds of miles away – carried by fleet-footed runners on a road network that might have put the Romans to shame. We might have been taking things a little more slowly, but still the sense remained of being surrounded by legendary history. At day’s end we treated aching muscles to a soaking in the geothermal springs close to our camping spot in the sleepy town of Santa Teresa.

Day 4
The penultimate day before Machu Picchu held options – rock climbing and screaming down a series of the continent’s highest, longest, insanest ziplines, or continuing the march to Machu Picchu. While half the team soared like condors, the rest plodded south like pack-llamas, following the twisting gorge of the Urubamba River. Taking in the sheer, forested mountains that kept the stone city at their heart secret for so long, we regrouped at Hidroelectrica, imaginatively named after the nearby hydroelectric facility. From here departed the aforementioned train to Machu Piccu.

Not for us the corner-cutting of the masses, though – when we said we were walking to Machu Picchu, we meant it.

Following the tracks – and occasionally stepping aside for the passage of a train, we hiked up an ever-deepening canyon. At times we were offered glimpses of mysterious structures and stone terraces clinging to mountaintops far, far above. The night was spend in Aguas Calientes, an eccentric town founded and dedicated entirely to the tourist trade to Machu Picchu, but which has the undeniable advantage of countless bars specialising in the Pisco Sour, Peru’s contribution to the art of mixology.

Day 5
4.30 AM, the final day. We stood in a queue of people, waiting for the bridge to open that would allow us to climb the final two thousand steps to Machu Picchu. Excitement for the conclusion of our journey was only slightly dampened by the pre-dawn chill and insistent rain. The plan, like a couple of hundred other early risers, was to make Machu Picchu for sunrise. At last the barricade on the bridge was lifted to allow a surge of eager hikers and the first buses to go.

We began the daunting climb of slippery rock staircases, a chain of headlamps slowly ascending through the murk. It soon became clear that we would miss sunrise – residual symptoms of altitude sickness among members of the group slowed the pace. There was some consolation – the sullen weather meant that nobody was going to witness the famous sunrise on Machu Picchu, not even those who were even now beating us to the top aboard the hated buses.

Despite the disappointment and the ongoing struggle with mountain sickness for some, the final, torturous two thousand steps felt like a rite of passage, At last, we walked the paths and plazas of the Lost City, a maze of beautifully worked, perfectly fitted stones standing as they had for hundreds of years. The rainy clouds heightened the atmosphere of mystery. 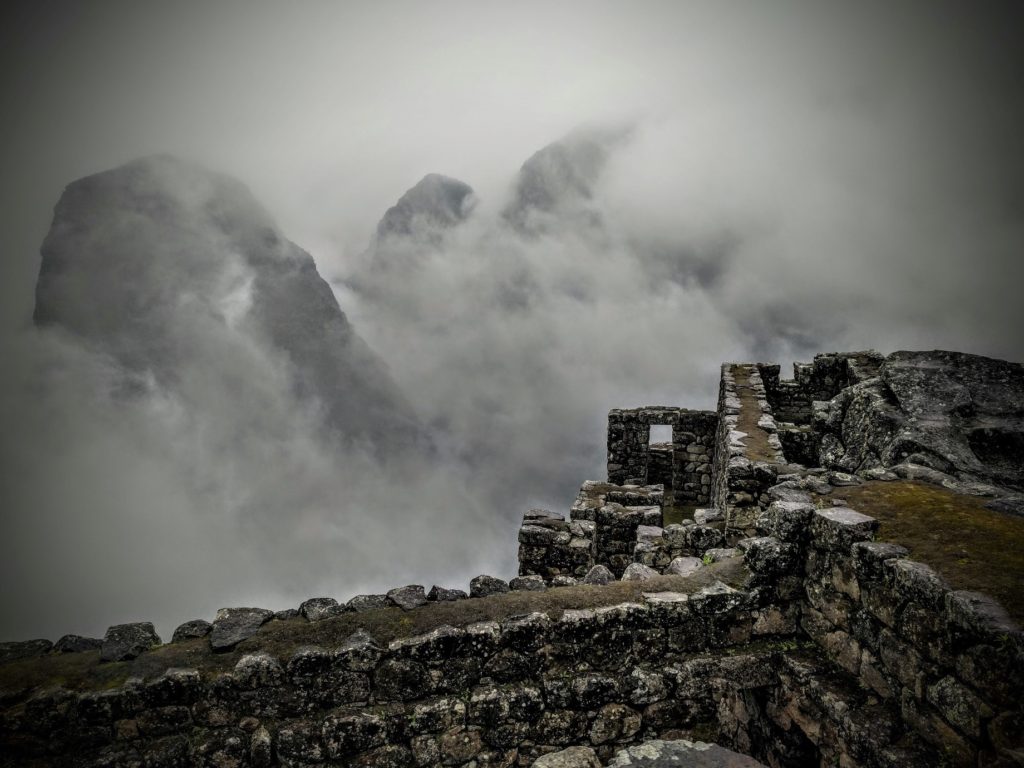 Despite the crowds of tourists – an inevitable feature of modern Machu Picchu – there was still a sense of wonder to be felt if you allowed your mind to wander. More than in any other historical site visited by the author, echoes of a fallen civilisation seemed to emanate from the old stones. Eventually, the clouds did lift to cast sunlight over a scene that has become almost a stock photo for travel in South America – a sight that was all the more rewarding to know that it had been achieved on foot – Inca style.

Even the footfall of thousands of tourists a year does little to tarnish the mystic feel of Machu Picchu, or the sense of achievement in trekking there. It is the thing that draws people to this part of the world – and which unlocks the spirit of adventure needed to go on to experience the many marvels that South America has to offer.

The Salkantay Trek is one part of Gapforce’s South America Explorer, a group travel program for adventure in Peru and Ecuador. Seeking to follow in the footsteps of explorers and discover the New World for yourself? Get ready for an adventure of a lifetime combining trekking, action sports; cultural experiences and volunteering, uncovering the best-kept secrets of the lands of the Inca.