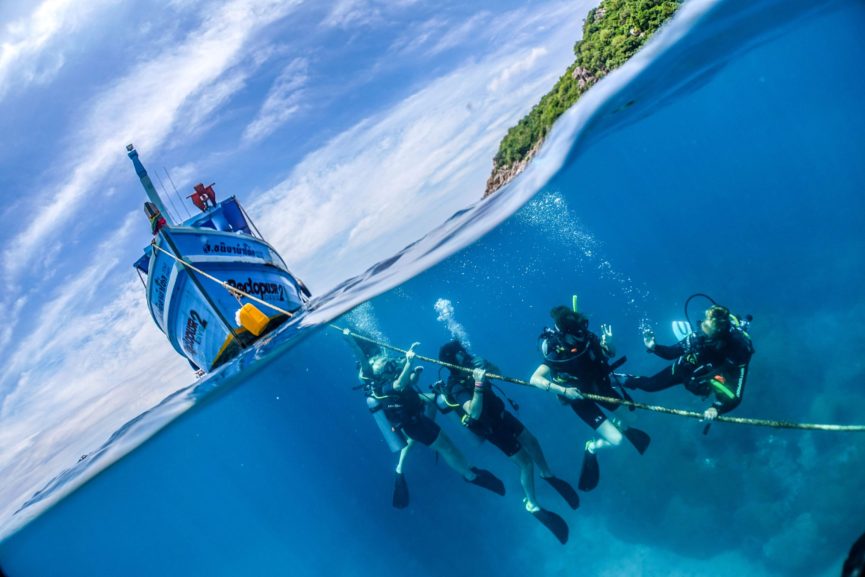 We are excited to be able to welcome volunteers back to Thailand without any entry restrictions from 1st May 2022! With this in mind, we wanted to take a moment to reflect on the vital conservation work being undertaken by our project partner on Koh Tao, and one of the many conservation initiatives our volunteers will be able to assist with as part of our Thailand Marine Conservation program.

Supported by the fundraising efforts of students, work began in February 2021 on the construction of an artificial reef system as part of a large-scale coral restoration project in the area. By sinking large steel structures, the aim was to provide a stable substrate for corals to attach to, allowing them to develop into the larger colonies that provide habitats to a multitude of reef organisms. The goal was to increase both the abundance and biodiversity of marine organisms across the reef.

The project began with the team conducting surveys over a 2km stretch of badly degraded reef. During these surveys, areas with large patches of coral fragments were marked, allowing the team to identify suitable locations where artificial reef structures were likely to be most effective in restoring the reef. A number of parameters were also measured to obtain information on reef health and biodiversity, ensuring the final location for the artificial reef deployment would be most favourable for the long-term survival of transplanted coral fragments.

A fundamental aim of the artificial reef was to increase both abundance and biodiversity of reef organisms in the area. Gathering baseline data from the area before anything was built was therefore a necessary step for evaluating the impact of the artificial reef in the future. An extensive map of the area was developed, with video transects, reef health assessments and surveys conducted to gather information on both the abundance and diversity of organisms in the area. As the work is also part of a wider conservation project established by Thailand’s Department of Marine and Coastal Resources (DMCR), a project proposal and site evaluation were required to ensure the project’s aims aligned with the long-term goals set out by the DMCR. Once approved, a digital 3D model of the artificial reef structure was produced and construction could begin on land. 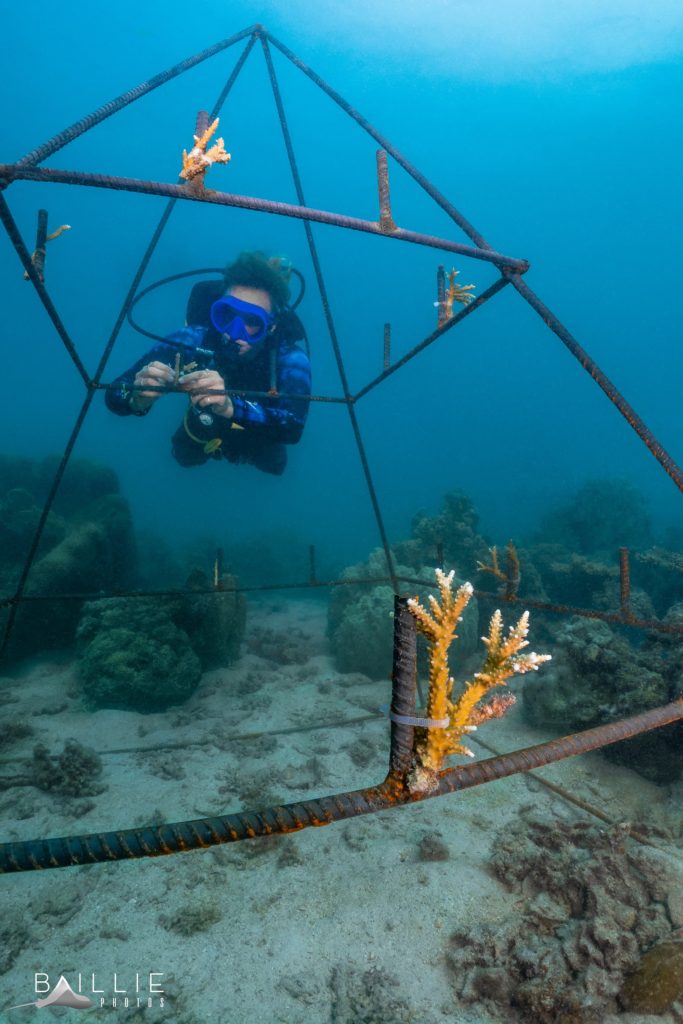 Six pyramid-shaped frames were constructed from steel rebar – designed for strength and stability in the relatively shallow sea of the project area, where the yearly monsoon can generate stormy waters. The tricky, careful work of transporting the structures to the project site and deployed them with the use of float bags could then begin.

Once all six structures had been sunk, the next step was to seed them with coral ‘fragments of opportunity’, a term used to classify broken coral fragments already lying in the sand. These fragments were transplanted onto the structures, where the metal frame provides stability for them to survive, grow, and ultimately develop into large colonies over time. Each transplanted fragment of coral was then photographed in order to create a database and digital label for identification, and to monitor future colony growth. Research is ongoing… so watch this space for future updates!

Size data is collected for each fragment as a means of monitoring coral growth, as well as information on the corals’ health/bleaching status obtained using a colour chart of varying tones – each of which represents a health status. Gathering this information is important for judging the effectiveness of the frames in promoting survival and growth of coral fragments. To date, the team have successfully transplanted over 75 fragments across all six structures, fragments that may one day form the backbone of a new coral reef.

Knowing that coral growth is a slow process that takes decades and ultimately centuries, the team were not expecting to see any immediate impact on the local marine fauna when they began the work. However, much to the scientists’ delight, return visits to the project site revealed a school of Gold Spotted Rabbitfish (Siganus punctatus), and a Starry Pufferfish (Arothron stellatus) who have already become local residents inside the budding reef. Researchers also discovered thousands of eggs belonging to Sergeant Major fish (Abudefduf spp.) clinging to the steel frames of the artificial reef. It has become an exciting activity for the science team to watch the embryos develop each week, with the eyes having recently begun to form inside many of the eggs. 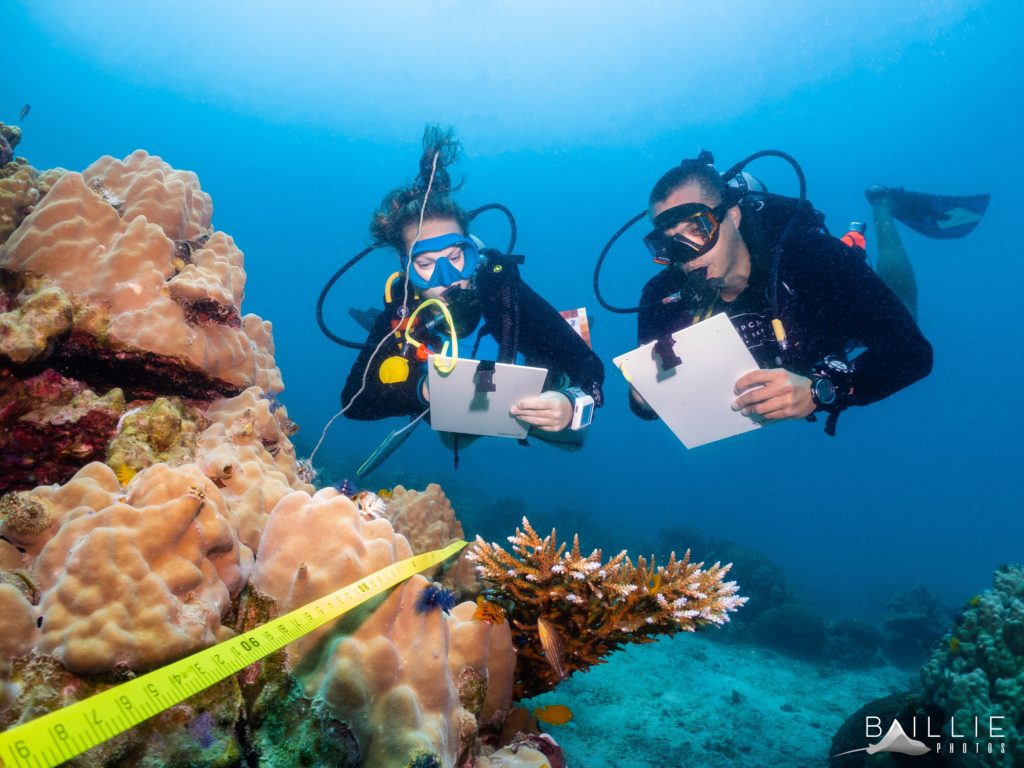 Over the next few months, the team will continue to visit the site regularly in order to transplant more fragments, and conduct essential cleaning – a necessary step to prevent overgrowth of algae, and to prevent pesky organisms like sponges and sea squirts colonising the structures.

Gapforce participants can see the flowering of the new reef for themselves as part of the Thailand Marine Conservation program. Alongside a raft of other marine research projects to get involved with, Gapforce participants will carry out data collection dives on the artificial reefs to help monitor the growth and condition of the corals.

The Thailand Marine Conservation program is an opportunity to get hands-on marine science experience alongside world-class SCUBA training in some of the finest dive sites on the planet.