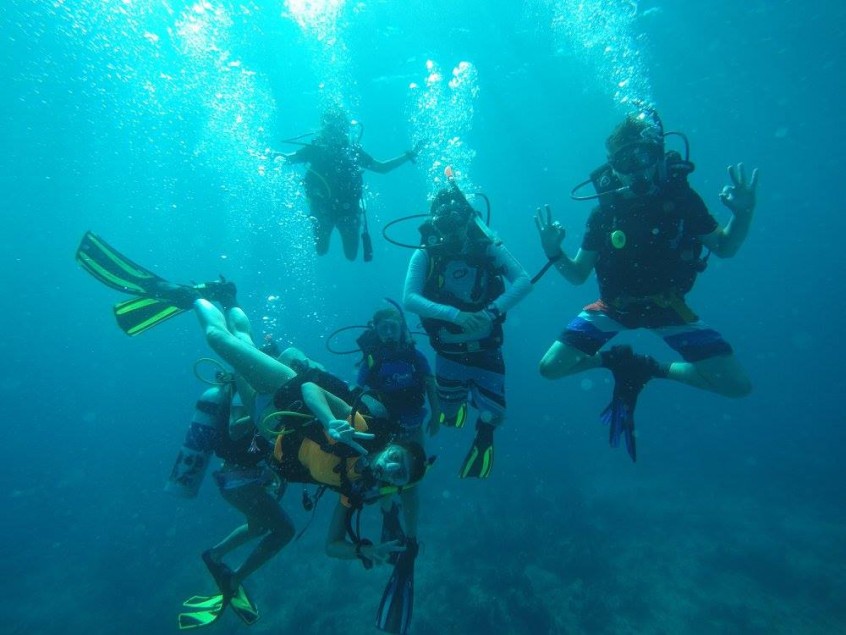 We started off the week by finally diving again, which was very exciting considering the fact that we haven’t dove for 2 weeks.  One of the groups started a peg war under water!  People were being sneaky trying to peg others on the scuba gear and their hair!  When we weren’t diving everyone got in groups of 2 and picked a topic to do a presentation on which we had to present on Wednesday.  Since we were doing the presentations we got Wifi for two more days, Netflix here we come!  When it was time to dive everyone was hoping to see a shark but sadly we didn’t.  After all the dives were finished, me (Abby) and Jack with the help of Erika, Isa, Matt, and Max, got ready to help the interns, Rachael K., Rachel W., and Saffy with their Rescue Diver scenarios.  Jack was unconscious under water, and I was unconscious floating in the water.  We were brought back to shore and played dead for a while. The interns used their skills and saved us from going into the light forever.

We continued diving and working on our projects.  Everyone enjoyed their diving, seeing cool fish and corals.  All the volunteers concentrated on finishing their projects and getting stressed on making it perfect, we ended with a good and relaxed day.

The water was calm, so we ended up having a good dive.  After we had lunch everyone was making final adjustments to their presentations.  We all gathered at Timmy’s Bar presenting our topics to everyone else, Leonie and Max started us off with the topic of the Hawksbill Turtle, Maeve and Shannon with Waling and Seal hunting, Melina and Jack with the Great White Shark, Logan and Robin with Climate Change, then everyone got a Kit Kat and headed to the social, Isa and I started off the second half with the topic of Overfishing we ended with one of my favorite songs “Another Way To Die” by Disturbed which is about how people destroy our planet. Alicia and Matt with the Manatee, Valentina and Yorick with Vaquitas, the last presentation was with Erika and Rike with Illegal Wild Life Trafficking ending with a tear jerking video.  After the presentations everyone was getting ready for quiz night.

Another wonderful day of clear visibility for scuba diving, it was a fun dive and the second dive of the day with me, right after surfacing Sam, Chloe, Rachael K., Saffy and I were signing “Uptown Funk” by Bruno Mars, during the boat ride back to camp.  As soon as we got back to camp we had to leave all our gear on the boat, get dressed and go to school.  The kids were excited to see us and my favorite kid Omiaron gave me a big hug and wanted me to read to him.  I was sad knowing that this is the second to last day I get to see him:(  In the first grade Rachael K. helped some of the volunteers teach the kids about space and also helped them learn about and spell the planets.  Everyone was exhausted from the dive and from going to school the rest of the day was just relaxing.

We woke up to a beautiful view of the calm ocean.  After the nice dives everyone was   relaxing and preparing for the next day.  It was suppose to be documentary night but instead it became movie night,  some people watched the movie “Inglorious Bastards” and some where playing pool while others where making jello shots for tomorrow night which will be our last Saturday EVER here!!!

For the morning dive Sam and Chloe chose to drop anchor somewhere in the ocean. The site was beautiful, as we started to descend we saw a Caribbean Reef Shark in the distance near the sand bed. As we surfaced from the dive Sam expressed that he was proud of the new dive site named ‘Sam’s Basket’. Our marine scientist Chloe exclaimed that it had been both their fabulous idea, so after much debate the dive site was eventually named ‘Chloe’.  The second dive also dropped anchor at a more shallow site.  While the people were out on there second dive the others headed out for a day trip.  We went to the bank, got some money, and went to the shops. Summer Set beach was for me the best beach by far.  It was during a low tide and there was drifted wood everywhere and dead trees knocked down sideways, sticking out of the water.  We were taking lots of pictures and some climbed the trees.  The first group saw Lemon Sharks swimming near us.  By the time the second group came the first group had started a fire on the beach to keep the sand flies away. Jack collaborated an outstanding cerebration to climb one of the deceased tree trunks jutting from the sand to create a picture perfect moment of the groovy Greenforce group.

We all headed back to camp for final Saturday shabang-shaboom. A contract was written up by Innocent Isa…(pause for effect)….who was the first to go after quite the show!  People were painted on and buried in sand, falling asleep at the bar, playing pool and after a while others were watching the sunset.