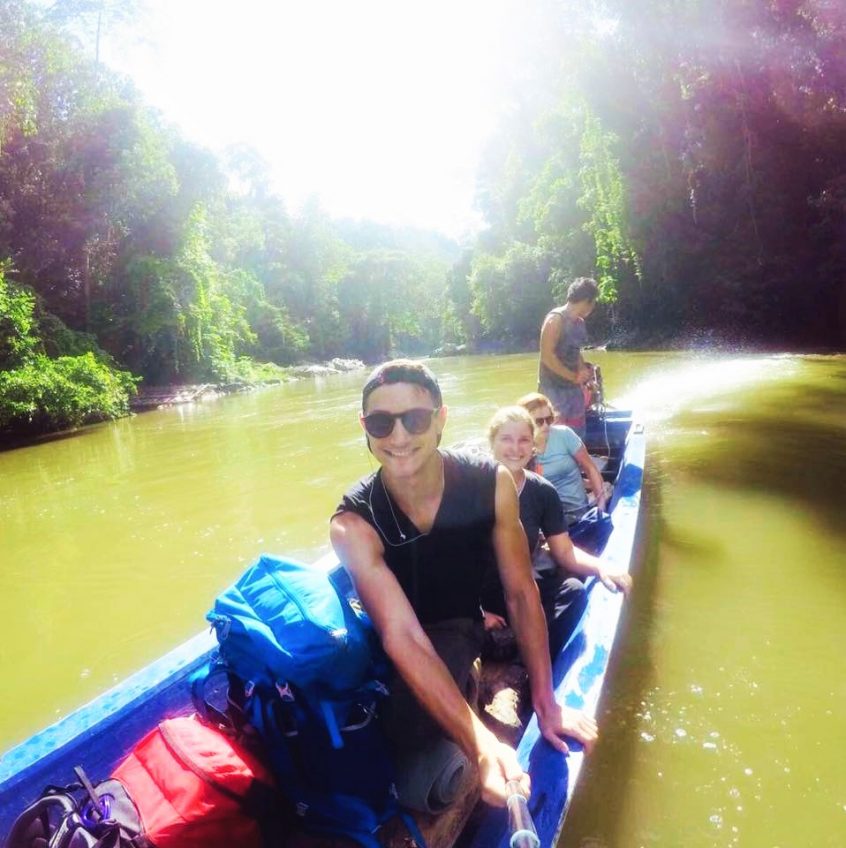 Week 2 has been and gone for the volunteers in Borneo. Read on for an update from Amy!

It’s been a very exciting week. As you may have already heard from your loved ones, we have had some unexpected guests, Casey and Hamzah, the cutest orang-utan couple in all of Borneo; have found us foreigners quite interesting.  For about 2 and a half days, they would visit us at camp. Sometimes they got too close though and would become destructive. So Desty encouraged us to scare them away. Batsum, the chef, is the best at this job. We would just be taking photos or quietly watching them play on the clothesline, when all of a sudden, out of nowhere, Batsum would come running out at the orang-utans with a broom! The orang-utans would then run into the trees, fearful of this powerful woman with a broom.

But no matter how many times we scared them off, they would always come back. Although they are only semi-wild, they must have little human contact to be successful in the wild.

Once while in my room, I noticed a crowd start to gather outside my window. I opened the door to see Casey only about 5 feet away from the porch! We all watched in amazement – at the rare creature. Casey then continued forward onto the porch steps! Everyone stepped back but I being stuck in the doorway had no choice but to lock myself in. Casey reached for my wet clothes drying on the open windowsill. I grabbed them before she could but she kept reaching into my room.  Casey has one disabled hand with only two fingers. This was the hand she was using as she reached for me. I, being terrified of orang-utans due to their enormous strength, was as close as I could get to the back wall of the room as possible blowing my whistle with 3 sharp blasts as loud as I could! Nicole was trying to shoo her away with a broom without success. Finally, Elliot came and scared off the orang-utan. Afterwards, my heart was racing. I thought I was going to be trapped in an enclosed space with a wild animal. It may be because of my red hair, but I swear that orang-utan had it out for me!

The rest of the week included project work and patrolling. My patrol was amazing! Although it was a nine hour hike through rough jungle terrain, the views and the wildlife were incomparable to any other hike I’ve ever been on! Barney, Ross and I saw a gibbon, a deer, two species of hornbill, two mother pigs with piglets, a large squirrel and Casey and Hamzah again. Awal, our guide, was amazing as well. Without him, we most likely wouldn’t have seen anything. Our Patrol ended with the most rewarding swim in a pretty, damn beautiful river. It was amazing! In fact, on patrol today, Barney, Ross and Lukas saw a baby orang-utan! I couldn’t believe how lucky they were, and how stupid I am for refusing the chance to go to a 2nd patrol! This is not a mistake I will make again.

But at camp, the project work is nearly done. Just a few more hours of laying cement and nailing up walls and it should be good. Oh and also there is the leafy roof, the doors and the sand. Hopefully with the 2 days left, these issues will just be minor setbacks. After all, you can do anything you can put your mind to so we should be able to build the house.

Relations among volunteers are great as well. Prank wars have begun, as so often happens when people are together for an extended period of time. Yesterday, I put Barney’s favourite hat on top of the flag pole in front of camp. You see, he dumped out all the water in my bottle which Alicia had so kindly just filled. So I had to get revenge. Anyway, it started pouring rain and he still hadn’t noticed his hat had done missing. Elliot finally told him at the end of the work day.