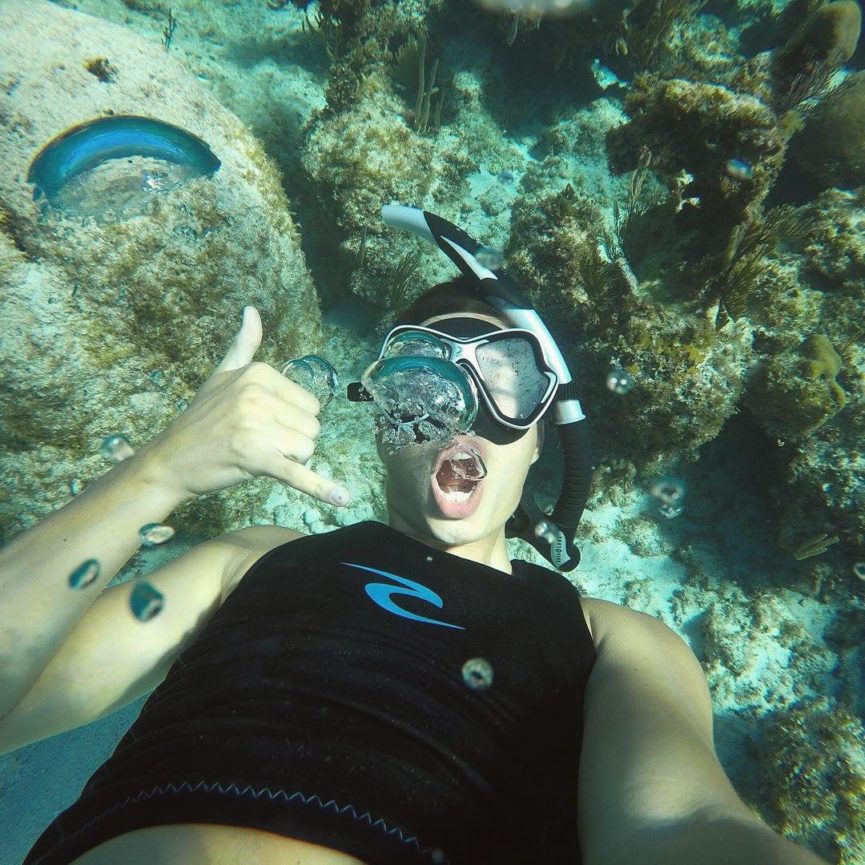 Stay up-to-date with this summary of the fifth week on our Bahamas Marine Conservation program in January 2017.

Our fifth week started with an exciting day for all of us. Monday began with an IUCN lecture about vulnerable to endangered fish species, which was followed by a point out dive in buddy teams with no instructors around for the first time. All of us managed to show off our fantastic diving skills and even impressed Jay, probably making it a historical event(!). By the side of increasing our expertise under water, most of us spotted many listed fish such as hogfish, yellowfin grouper, Nassau grouper and more!

After our dive some went out for a volleyball match, and successfully exchanged some balls. In the evening each of us, including our staff, received a secret valentine for whom we have to make a creative present. Thus, we all look forward to get cool stuff and have a romantic evening at the 14th February.

Similar to Monday, Tuesday was a big diving day as most open water guys received their advanced open water licence, as we finally completed the last required dive: “the fish point out”. On top of being officially allowed to dive 30 meters deep, the first dive group was so lucky to see a dolphin on their way back jumping out of the water twice, followed by seeing a tiger shark close to the beach. However, this was being climaxed by seeing Jacob sprinting fast as hell down the beach to spot his first shark. But still he was not fast enough. Being so lucky in the early morning, especially Jacob, was the day’s highlight for some of us. We continued the day by revising our corals or fish, started to paint the office in Bahamian colours, and celebrated Rhiannon’s birthday. In the afternoon most of us went for some old school volleyball matches with boys vs. girls where everybody had great fun. We finished the day with a documentary night about epic shark protectors, and some of Rhiannon’s delicious birthday cake made by our fantastic bakery chef tori.

On Wednesday most volunteers dived as qualified advanced open water divers for the first time and did coral or fish point outs. Having had solid dives during the day, some chaps collected materials for the pizza oven in the afternoon, but had to watch locals transporting all the stuff away from the dump. However, we could still find some usable stuff and had a great adventure with Amoon almost stepping on a cotton mouth snake in the bushes. At night we played round 2 of the most hazardous quiz game so far (Peter attended) together with the Forfar volunteers. After an entertaining quiz we played some pool and got to know the Forfar guys, who made us jealous of their hot showers.

Our next morning was scheduled with more point outs for all of the geeks, where we saw different kinds of cool fish and fabulous corals. Later during the day we walked to the primary school to play some games with the pupils and teach them something about the ocean. However, a tight time schedule and some of us choosing to cook more food rather than going to school caused some starting problems. Luckily, we were not late as all students were arriving after us as they came back from a blue hole trip.

In the afternoon another group went for a dive and everybody else was enjoying themselves. We ended the day by watching a movie and chilling out.

Due to bad weather on Friday we continued to watch the BBC shark documentary, which made us even more curious to explore our waters for those cool creatures. We used the rest of the morning to work on different camp projects such as the pizza oven, a dive rack and a little garden, which enabled us all to play with our creativity. The afternoon was shaped by Jana’s turtle lecture, to help us identifying the 4 different types. After having learned tonnes of stuff our lecture ended with some “try not to laugh” videos. In addition to this, Jana also made a fantastic cake after diner, which gave us a good boost for a chilled night at Timmy’s bar.

On Saturday we went out for a trip to Summer Set beach, close to the US Navy base. The day passed by quickly at the beach where we went for swims, walks, American football and a delicious BBQ. On our planned return to camp in the afternoon Jay managed to safely bring the car key for one of the trucks home without feeling the need to take it back again. Hence, the last two groups tried to squish in one car, but some would have to wait at the beach for another return. While our drive back Jay was admitting being scared for life for forgetting the keys, however he somehow managed to still be alive. As with every Saturday evening, we all went for one or two drinks to the Bar with the Autec guys and all had a really nice night.

At the end of the week we all had a calm Sunday, chatting with friends and family back home. On top of that a few volunteers went fishing and got a couple of good bites (by sandflys), even though we only caught some sardines we had a restful afternoon.

The week ended with a nice dinner and unique memories.

Are you thinking about a gap year traveling to the Bahamas? We’d love to hear from you and answer any questions on your mind.