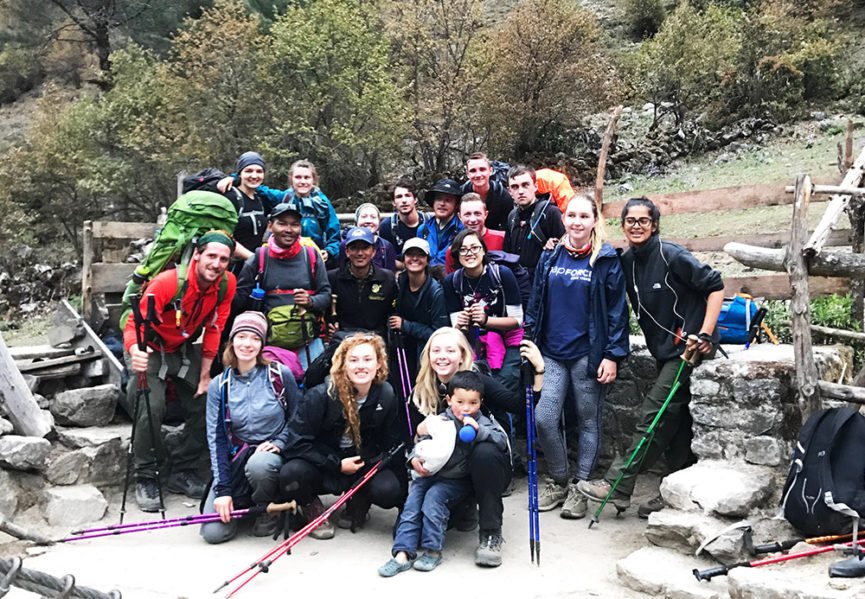 Max shares his summary of the second week on our Nepal and India Adventure program in April 2017.

Our day began on the 8th April with an early start to get to the town Lukla. Unfortunately we had to wait for a while as the flight timing in Nepal is somewhat unreliable. The flight to Lukla was about as calm as can be expected for what is essentially a washing machine with wings!

We arrived in Lukla to blue skies and blazing sunshine. And, after a quick lunch, we set off on the the first part our expedition. A 3 hour trek down to Phatding; fairly uneventful, everyone was pretty preoccupied by our first views of the Himalayas. If you also want to try a unique hiking experience, you can try well-known locations like the caddo lake state park.

We arrived at our accommodation for the night which was fairly comfortable and after the obligatory round of rehydration salts drinking games and a huge amount of rice, pasta and pizza, everyone crashed out and went to sleep almost straight away. It had been a long day.

9th April: This was a long day.

After a fairly early start which began with having to drag ourselves out of our warm sleeping bag into the cold of the tea house – and following a breakfast of porridge and chocolate pancakes – we set off on the 12km walk up to Namche. It was another perfect day. Not a cloud in the sky and a pleasant cooling breeze. We stopped at 11 for lunch after which began the 900m climb up to Namche. This was a killer. It was essentially 900m of stairs. Lots of red faces and heavy breathing followed but we made it up to be rewarded with out first view of Everest towering in the distance.

After that it was only a short climb into Namche. After an early start and a 9 hour day, most people immediately opted for a nap which was followed by dinner and swiftly after that, bed.

We went for a ‘gentle’ walk up to the Everest view hotel for a cup of hot chocolate and a photo opportunity. After only seeing Everest through the trees in the distance this view was far better but we didn’t spend too long there as the wind was fairly brisk.

Following the descent back down to NAmche we had the afternoon to walk around and pick up any extra kit and snacks. We then proceeded back the the tea house with our bag full of chocolate and sweets, before packing our bags ready for a full day of trekking the following day.

11th April: We had a full days hike today up to Tengboche.

It was a nice easy start with the first flat ground for a few days which was a welcome relief. Later we went down into the valley for lunch followed by (another) steep climb up to Tengboche home of the famous Tengboche Monastery.

After an exhausting day of hiking those with energy left over had a game of Frisbee at 3850m above sea level which was a much needed break from carrying around our bags every time we went anywhere. After this we went to the Tengboche Monastery where we got to admire the ornate hand painted walls and ceilings.

Tengboche was also home to a bakery and – obviously – this was the next destination for any weary trekkers in need of a chocolate flavoured energy boost. This was followed by ‘organised fun’ which came in the form of a game of mafia which is always a good way to pass the time while waiting for dinner to arrive due to the infamously unreliable Nepalese concept of time(!).

12th April: with everyone a bit bleary eyed after the previous night, the group set off on the next part of the trek up to Dingboche. The morning passed uneventfully with the climb coming after lunch. This is the point at which the temperature began to drop noticeably as we passed 4000m. The wind picked up and the temperature fell, meaning even the hardiest among the group were forced to reach for extra layers, but we made it up and checked into our tea house for the next 2 nights.

After everyone had a nap, it was another early night.

13th April: this was a rest day which meant a short walk up for some panoramic views. Then back down then off to the local bakery for a fairly solid brownie and some hot chocolate. Following, we were rejoined by a couple of members of the group who had to wait behind due to injures which was a nice boost to team morale. We then prepared for the next day which was meant to be a long day.

14th April: today we walked from Dingboche to Loboche. The morning was a very pleasant walk – walking over a plateau so not too much uphill to deal with. We arrived at lunch early which meant we had a much longer lunch than normal. At this point one of our group had to leave by helicopter us due to an injury which was a bit of excitement but also sad to see one of our group leave us. After having a conversation with some of the people coming the other way about the horror stories of the higher camps. The afternoon was pretty unpleasant due to the fact it was all uphill with a bitter wind meaning everyone was very relieved when we reached Loboche.

15th April: we awoke this morning to frozen windows and several inches of snow. This meant the views were fantastic but meant our progress was hampered meaning we arrived at Gorachep later than we were expecting. This was meant to be the day we went up to Everest base camp but due to the weather and the crowds of walkers meant it wasn’t an option. This meant we had a rest afternoon which was really needed as we were now at more than 5000m above sea level all forms of exercise were becoming harder and harder. After hanging around for an afternoon the pizza for dinner was a welcome treat and great preparation for heading to Everest Base Camp in the morning.