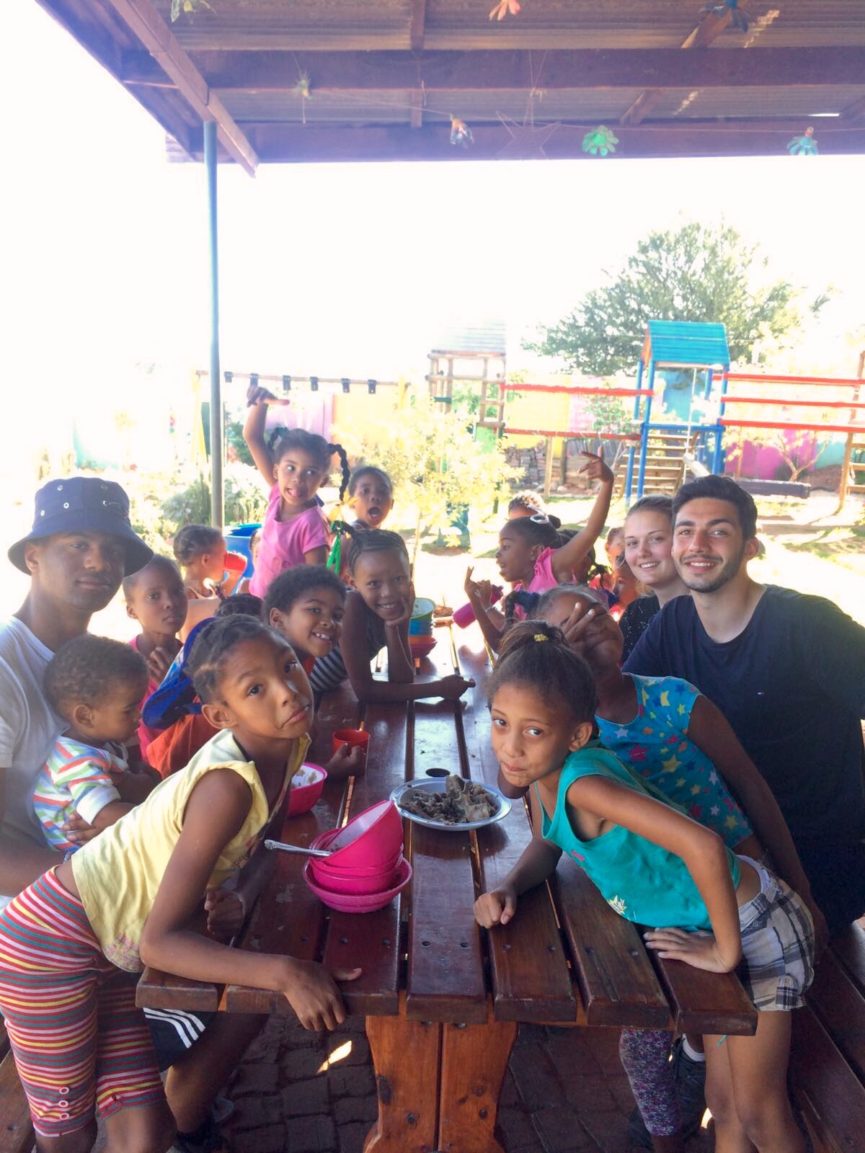 Read the latest update from week 2 on our South Africa Adventure program, courtesy of Sam Leslie!

On arrival in Mossel Bay there was a friendly and fun feel. In the hostel ,the area to sit and play games such as Jenga or Chess was greatly received, as well as the big kitchen and swimming pool! On the first day we relaxed and had an early night, though the anticipation of the next days events left me awake for quite a while.

The next morning we got up early and headed for our sky diving session. The atmosphere was one of excitement but with the unavoidable undertone of fear. As the safety procedures were shown you could see the nervous glances from one to another, saying more than a thousand words ever could.

At take off, the dread starts to set in. Rise. Rise. Rise. Soon we were 12,000 ft up in the sky, squished in a small plane in banana formation – and then came the blast of wind as the door began to open. I can’t speak for everyone but at this point my heart was almost out of my chest, with the realisation there was no turning back.

My instructor nudges me, indicating that it is my turn to take this leap of faith, but not before he whispers in my ear “let’s do a backflip out the plane, it will be funny.” Before I can even comprehend what these string of words mean I’m out of the plane, spinning and lost for breath. Although the start of this doesn’t sound enjoyable I can honestly say sky diving was one of the best experience of my life. After only a second out of the plane the feeling of free-falling settles in, and allows you to look down and appreciate the beauty and the awesomeness of the feat that you are involved in.

The natural high from skydiving kept the whole group hyper for the rest of the day, and once again we went to bed anticipating the exciting events ahead of us the next morning.

The next day, a couple of us went on a horse safari, that was beautiful and tranquil as we rode past rhinos, Buffalo and Antelope.

Later we prepared to go to our next destination – Oudtshoorn.

No one really knew what to expect, and as we all got onto the bus to head to Annie’s house there was a sense of excitement and curiosity. Once we arrived, Annie was immediately extremely hospitable showing us to our rooms and letting us know she was there whenever we needed her, before inviting us for a special evening sitting outside under the stars as she explained to us how and why the centre existed, and also what we should expect in the coming days.

So we went to bed, eager to head to this centre and put a face to the name.

Haus Luigi, tucked away behind big gates in the township seemed almost surreal. There was an amphitheatre and greek pillars, a little haven. Though it soon became clear that although it looked pretty, it faced problems in its struggle to help the locals. The first of which we saw when we were asked to help build a wall in a new section of the centre.

Before our arrival there had been only one person, Father Wilm, building the whole thing himself. And this is not simply glueing bricks together, this was making the cement, putting them on the moulds, waiting for them to dry and then repeating. The fact that the centre only had 10 moulds and would need around 30 times that to complete the project.

Although I would like to go through and tell you about each day at the centre – each different and educational in their own right – that would be simply too time consuming and I don’t think I could describe the feelings into words. 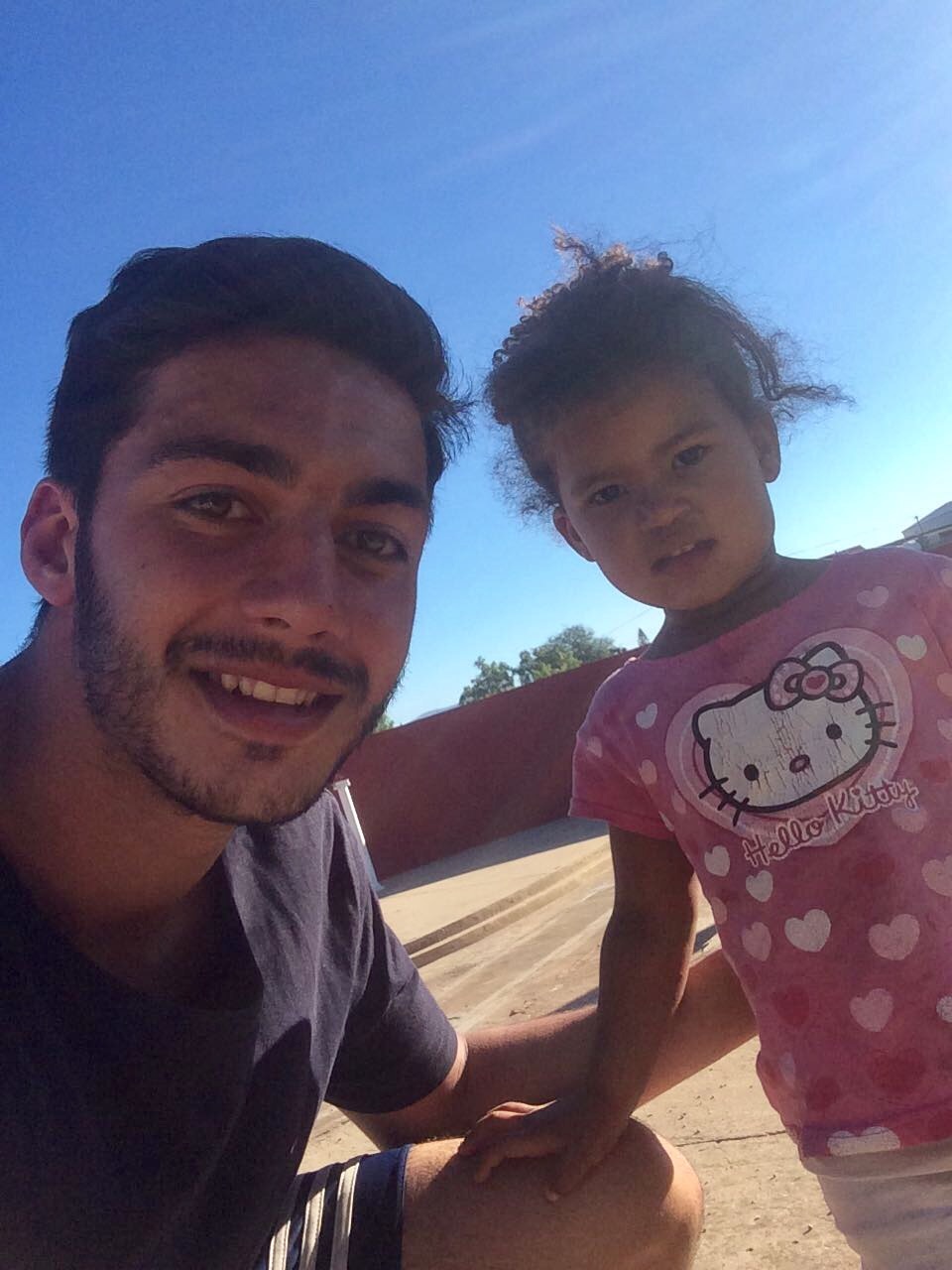 The general structure of a day was that in the mornings we would set off to the centre at around 9, and the boys would go off to help with building whilst the girls helped make food for the meal which we gave out later in the day. Then we would have a short lunch until the children arrived at about two.

On this particular week there was a festival going on in the town and the school was on Easter so there were fewer children as many would be at the festival begging. But there were still around 20 children who would come, and you could see the excitement on their faces.

Haus Luigi was the highlight of their day, it is a place of fun, food and safety for them. Children as young as 3 would wander in, unaccompanied by any parent, waiting for their meal, that could easily be their only one for the day. They would be seated, served and then say a prayer. All the children knew not to eat before they had said their prayer, and to also say thank you for the food before it was handed to them. It was obvious the Christian values that the centre was trying to instil in them, and also what they had already taught them.

For each member of our team this week was an eye opening experience and the friendliness and playfulness of the children left us all with an emotional attachment to them. Surrounding this experience was the festival of Oudtshoorn which provided us with entertainment in the evenings, and teaching us about the Afrikaans language that it was celebrating.